“The Hall of Fantasy” tribute on ‘Radio Once More’

On our October 7th “Woo-Hoo” Wednesday show on ‘Radio Once More’, Helen and I paid tribute to one of my favorite Old Time Radio Shows, “The Hall of Fantasy”. I was first exposed to this radio horror series in the early 1980’s, on WCAU-1210 as part of their Radio Family Classics program of classic Old time Radio Shows. I’ve Loved this series since I first heard it and I’ve been enjoying it ever since.

The Hall of Fantasy was created, produced, directed, and written by Richard Thorne. Mr. Thorne also acted in most of the episodes and was the host and announcer as well.

Here is our 90 second overview of “The Hall of Fantasy”

Here is the entire discussion I had with Jan Kidd

After our delightful discussion, we played three classic episodes from the “Hall of Fantasy” complete with introductions by Jan Kidd.

“He Who Follows Me”.

The very eerie “He Who Follows Me” is one of my very favorite episodes from the “Hall of Fantasy” and one of first ones that I listened to on 1210 WCAU back in the early 1980’s. 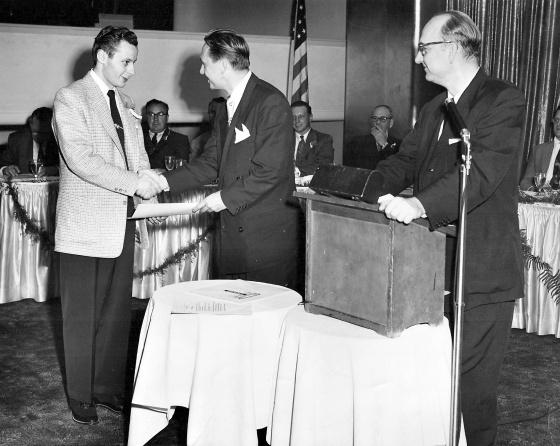 Richard Thorne receiving an award, possibly during his time with WGN in Chicago.

Connection or Coincidence? You be the judge. 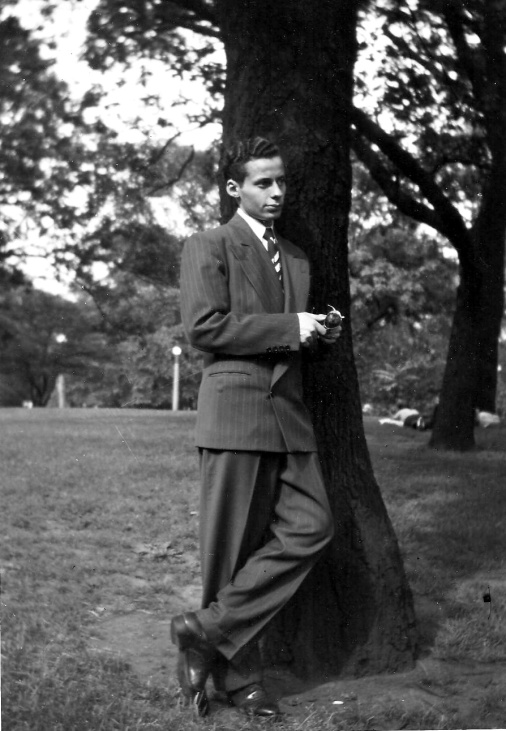 Richard Thorne by a tree, no doubt contemplating his next “Hall of Fantasy” production.

Helen and I are proud and honored to pay tribute to the “Hall of Fantasy” and Richard Thorne on ‘Radio Once More’. And again, a big thanks to Jan Kidd for sharing her wonderful stories and memories with us and for providing us with the great photos of her Father. Thanks Jan!!!!

I hope this encourages you to give a second listen and take another walk down the corridor of the “Hall of Fantasy”. I truly believe that it is an underrated ‘Old Time Radio’ horror series, and is worth listening to, especially during this Halloween time of the year.

Hello All!!!!! Helen and I are proud to host another installment of “An Evening of “Old Time Radio” at The Daily Grind Coffee Shop located at 48 High Street in beautiful, downtown Mount Holly, New Jersey. If any of you wonderful folks happen to be in the vicinity of Mount Holly, New Jersey on Friday, October 9th (6:30PM to 9PM), we cordially invite you to stop by and enjoy a hot cup of coffee as we present the return of, “Fright Night”. We will be presenting three ‘spine tingling’ classic shows from the “Golden Age of Radio” that will certainly be thrilling and chilling, getting us all in the ‘Halloween Spirit’.

Stay for 1, 2, or all 3 shows!!!! As a special bonus, we are also planning to broadcast the presentation live on www.RadioOnceMore.com Wednesday, October 21st at 9PM. This gives you two chances to catch our “Fright Night” presentation live, once at the Daily Grind Coffee Shop, and once on “Radio Once More”. We have some great scary shows, Halloween music, and treats lined up for this special Friday evening event. Also, rumor has it that there will be a few Give-a-Ways!!!!

Stop by and try something a little different and experience how we were entertained back in the 1930′s, 40′s, and 50′s before television. All you need are your ears and your imagination!!!! Arrive early if you plan on attending, it is a cozy coffee shop with limited seating. Helen and I sincerely hope to see you Friday evening at the Daily Grind Coffee Shop on October 9th at 6:30PM and on “Radio Once More” on Wednesday evening October 21st at 9PM!!!!! Woo-Hoo!!!!

‘Radio Memories’ on ‘Radio Once More’

Recently, I had the pleasure to chat with several members of the ‘Radio Once More’ Live Show team, where we asked how everyone was introduced to the ‘Golden Age of Radio’. We received a wide variety of responses and we also learned a bit about everyone’s favorite ‘Old Time Radio’ shows to listen to back when they first started listening to ‘Old Time Radio’, and their favorite shows to listen to now. A big thanks to Chris Holm, Rodney Bowcock, Steven Cone, Gary Lowe, Ken Stockinger, and the ‘Radio Once More’ Big Boss…Neal Ellis for participating in this fun and enlightening discussion. Below is our complete discussion:

Also during our ‘Radio Memories’ Show, I shared my story on how I was first introduced to ‘The Golden Age of Radio’ and I also discussed my appearance on the ‘Open Phone America’ segment of the ‘Larry King Radio Show’ back in the early 1980’s.  Below is the story, complete with my appearance on the ‘Larry King Radio Show’ and some other audio goodies.  I hope you enjoy the story, and as Larry would say back in the 1980’s…..We bid you a Fond Adieu!!!!! 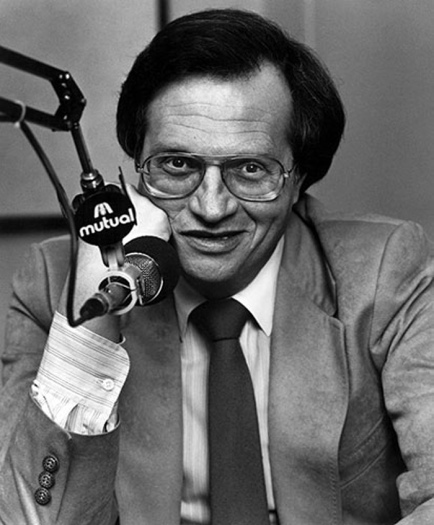 A publicity photo of Larry King back in the early 1980’s when he hosted the overnight talk show “The Larry King Show” every Monday-Friday on the Mutual Broadcasting System.