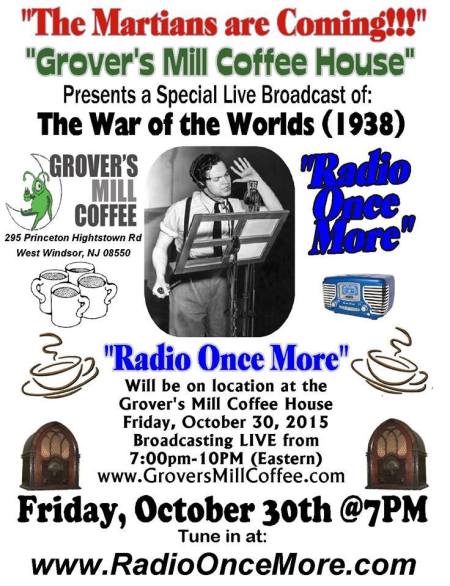 Last month on October 30th, Helen and I had the honor and pleasure to join the gang from ‘Radio Once More’ at the Grover’s Mill Coffee House in West Windsor, New Jersey. Our wonderful hosts, the proprietors of the coffee shop, Franc Gambatese and his lovely wife Mickey every year invite ‘Radio Once More’ to present Orson Welles’ Mercury Theatre on the Air version of ‘The War of the Worlds’ from (1938). 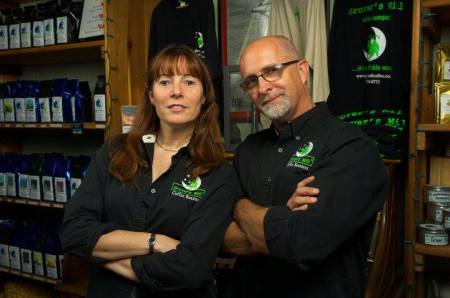 Our hosts and proprietors of the ‘Grover’s Mill Coffee House’,           Mickey and Franc.

It was a packed house at the coffee shop, and many of the patrons there heard the historic broadcast for the very first time. Ken Stockinger and the ‘Radio Once More’ big boss, Neal Ellis, presented the history of this broadcast and discussed the circumstances of the time in 1938 that enabled this amazing radio broadcast to start a panic and actually create a believable event that New Jersey was being invaded by planet Mars. The publicity of this broadcast instantly made Orson Welles a recognizable name, and lead to a corporate sponsor when Campbell Soups agreed to sponsor the show and then it became The Campbell Playhouse in December of 1938. 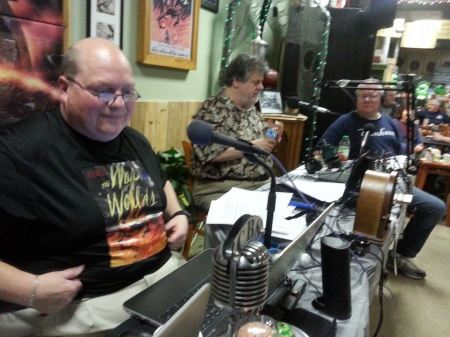 After the broadcast was completed, everyone at the coffee house was treated by a telephone conversation with Ann Robinson, the co-star of the 1953 Hollywood film version of ‘The War of the Worlds’. The call was arranged and coordinated by Franc & Mickey, and with the efforts of Jo Snyder Ellis, who was running operations of ‘Radio Once More’ at the Maryland studio. I was honored to chat with Ann, along with Neal and Franc and discuss some of her memories of being in this classic 1953 Sci-Fi film along with Gene Barry. Below is the conversation with Hollywood star, Ann Robinson.

Ann Robinson, co-star of the 1953 War of the Worlds Film

Ann Robinson’s most memorable scene in the classic 1953 ‘War of the Worlds’ with Martian hand on her shoulder.

If by chance, you have never heard this historical broadcast of ‘War of the Worlds’, I highly recommend you to listen to it and try to listen to it as if you were in 1938:  no television, no internet, war breaking out in Europe, and the United States inching closer to war. Keeping all this in mind, it’s a bit more understandable why a percentage (albeit a small percentage) actually thought the invasion was happening. The broadcast is available online at many locations including:

We hope you enjoy this broadcast and perhaps if you are in the New Jersey area, you’ll stop by and check out the ‘Grover’s Mill Coffee House’ where it is decorated in a ‘War of the Worlds’ motif all year long. There is also a commemorative monument close by in Van Nest Park. If you enjoy this type of nostalgia, we hope you tune in to the internet radio station, ‘Radio Once More’ and listen to some of the great programming and the various Live Show hosts including Neal, Ken, Gary Lowe, (and Helen and myself as well).

A big thanks to Mickey, Franc and the entire staff at the Coffee House and our buddies at ‘Radio Once More’ (including Jo Snyder Ellis at the helm in Maryland).  Maybe we’ll see you next October 30th at the ‘Grover’s Mill Coffee House’ where I am sure the Martians will give it another go against planet Earth. And as Orson Welles ended this historical broadcast, “That grinning, glowing, globular invader of your living room is an inhabitant of the pumpkin patch, and if your doorbell rings and nobody’s there, that was no Martian………….it’s Halloween.” 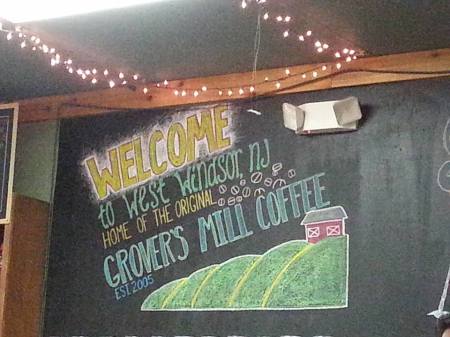 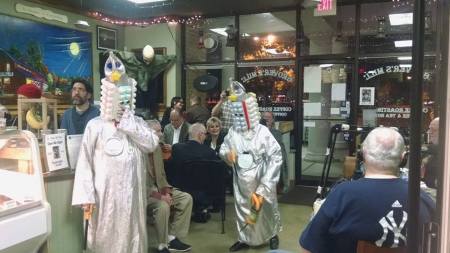 Helen and Holmsey having a great time at the ‘Grover’s Mill Coffee House’.

I think Helen sees more Martian activity at Grover’s Mill!!!!  We’ll be ready for a re-match next October 30th!!!!