“Get Together with Walden & Johnny”

In March, I tried an experiment during one of our “Woo-Hoo Extra” Live Shows on “Radio Once More”.  I’ve already posted about Helen and I being guests on the “Walden and Patricia Show” on the internet radio station “YesterdayUSA” in January.  Well, with the flexibility of the “Woo-Hoo Extra” shows, I got to thinking that perhaps we can attempt a simulcast with Walden while he was broadcasting on “YesterdayUSA”.  The “Big Boss” Neal Ellis loved the idea and worked very diligently with me to have our board wired correctly to make this monumental broadcast work.  Walden was also very excited about the idea and worked a few tests with me to make sure we were connected to the conferencing application “Zoom” correctly.  So far, all was still good for a simulcast between the two stations.  Regarding “popping on” for a “Woo-Hoo Extra” on Radio Once More, I attempt to cause the least amount of disruption as possible.  So when “popping on”, I attempt to join in at the beginning of a three hour block, that way I am not cutting in while a radio show is in progress.  Also, for the simulcast, I did not want to disrupt a Live Show with Walden while he was on with Patricia, or John & Larry Gassman, etc.  The best way to accomplish this was to wait after midnight eastern time before going on with Walden.  The next block on “Radio Once More” began at 3AM, so our “Woo-Hoo Extra” simulcast would begin at 3AM eastern time, midnight pacific time for Walden.  Now I am patiently waiting upstairs in our office/studio for 3AM,  and to throw a curve ball to this broadcast, at 2AM, for some unknown reason, I lost total internet!!!  Now if you are ever planning to do an internet radio show, the number 1 ingredient is……internet!!!!!!  Well, the internet did return, but left again at 2:20AM.  Now I am quite nervous, however, it returned for good and a smooth connection was made shortly after 3AM and the first simulcast went well.

The mission of this first simulcast was to make the connection and do a quick 1 hour test show.  Well, Walden and I chatted, and chatted, and next thing I realized, it was 3:57AM….time to say Good-Bye!!!!  Well, we were still going strong and I asked Walden if he could stay on a bit longer, and Walden assured me that he was fine so we proceeded.  When I spoke with the Big Boss Neal Ellis earlier in the day, he wished me well and told me if I needed more time, to feel free and use it.  Boy did I!!!!  We continued chatting another half hour, another hour, and then next thing you know, it was 5:57AM, definitely time to say Good Bye!!!!!  I signed off and said Good Bye, and headed downstairs.  I was greeted by the wonderful Helen who was already showered and dressed for work.  She even shared with me that when she heard Walden on our internet radio in the kitchen, she initially thought that I forgot to switch the station back to automation…until she heard me belly laughing with Walden.  She then realized that we were still simulcasting.

Walden and I discussed our simulcast and came up with a plan to make this a regular segment on our shows.  We agreed that we’ll have a simulcast every other month, thereby adding a bit of extra joint fun to both of our stations.  Below is the complete first simulcast from March 8th, 2019.

We scheduled our next simulcast for mid-May, and Walden arranged for John & Larry Gassman to be part of this broadcast as well.  Also, this enabled us to go on at 12AM instead of 3AM, much more workable for me.  When we started the second simulcast, John & Larry were full of fun and enthusiasm about the broadcast.  This one ended up being a three hour online party!!!!  We all had a blast and I know I was laughing and smiling during the entire three hour broadcast.  John and Larry shared many great stories about the many “Old Time Radio” legends that they met and had discussions with.  This included a wonderful story of going to the residence of Mel Blanc and having a discussion with him.  They also mentioned many others that they knew and chatted with including William Conrad, June Foray, Vic Perrin, and Frank Nelson among others. These stories are definitely priceless. 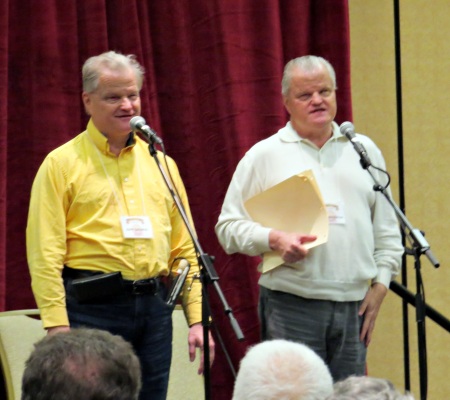 We also added in some “Trivia” fun by playing a bit of “Name That Tune” with various themes from Radio, Television, Movies, and Cartoons.  Walden was also prepared with clips on his end so we all had fun guessing the themes, and they triggered conversation among the four of us and with some of our listeners that called us during the simulcast.  We even received a few requests for cartoon themes which we gladly played.

The three hours went quickly, and we had another fun-filled simulcast. Below is the complete simulcast from May 17th, 2019.

These simulcasts have been tremendously fun for me, and I would like to thank Walden along with John and Larry Gassman for sharing their time with us and creating a unique and fun radio venture with our YestersdayUSA and Radio Once More simulcasts.  Thanks so much and I look forward to our next one in July!!!!!!!!

Holmsey having fun in the studio!!!!!